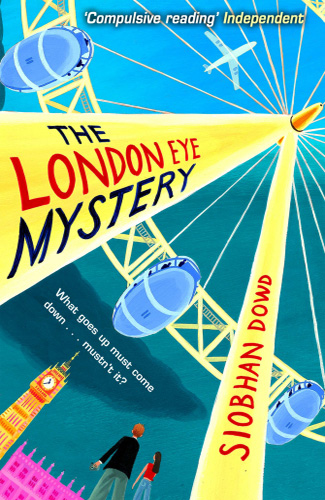 Monday, 24 May, 11.32 a.m. Ted and Kat watch their cousin Salim get on board the London Eye. He turns and waves and the pod rises from the ground.

Ted and his older sister Kat become sleuthing partners since the police are having no luck. Despite their prickly relationship, they overcome their differences to follow a trail of clues across London in a desperate bid to find their cousin. And ultimately it comes down to Ted, whose brain runs on its own unique operating system, to find the key to the mystery.

In Spring 2009. the Unicorn Theatre adapted The London Eye Mystery  for the stage. The story was adapted by Unicorn Artistic Associate Carl Miller, directed by Rosamunde Hutt and performed by the Unicorn ensemble and received a host of rave reviews.

“It’s delightful to see the Unicorn launch its spring season headliner with such a visible spring in its step. It’s hit a bull’s-eye with Carl Miller’s charming adaptation of the 2007 children’s book by Siobhan Dowd. No wonder the sassy production has such a Tigger-esque bounce.” The Evening Standard. March 2010

The London Eye Mystery is published in the UK and the US by David Fickling Books, an imprint of Random House.

Hilary Delamere at The Agency (London) Ltd handles all rights in Siobhan’s books please contact her at: hd-office@theagency.co.uk

The London Eye Mystery is available in the following translations:

Winner of the Bisto Irish Book of the Year Award 2008

Longlisted for The Carnegie medal 2008

Shortlisted for the 2008 Redbridge Children’s Book of the Year

Winner of The Doncaster Book Award 2008

Runner up in the 2008 Sefton Super Reads Award

Winner of the 2008 Essex Book Awards

A 2008 New York Public Library Title for Reading and Sharing