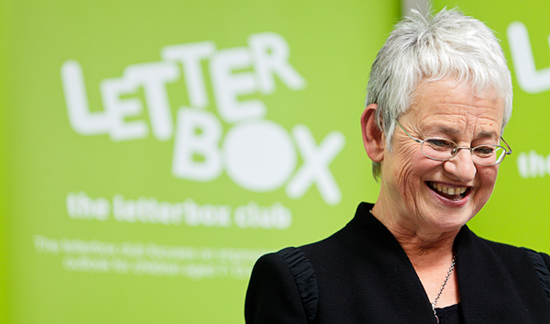 The first grant awarded by the Trust was for a pilot project for an expansion of the Letterbox Club scheme targetting 11-13 year old Looked after Children. In 2010 60 children in 11 different Local Authorities were selected, sent books and writing materials throughout the year, and their reactions and reading was monitored by academics at the University of Leicester. By 2011 and the Official launch this september, this had expanded to over 935 children across 47 Local Authorities.

The Launch / celebration of the scheme this september was held at Portcullis House in Westminster, hosted by Edward Timpson MP, Chair of the All Party Parliamentary Group for Looked After Children, on behalf of Booktrust, who run the Letterbox club. Many politicians, academics and representatives from both the childrens’ book world and local authorities attended, including Letterbox Club patron Dame Jacqueline Wilson who said:

“A child in care is often shuffled around many different homes, often with many changes of school so it’s no wonder that some of these kids find it hard going and stop trying hard with school work. Sometimes looked-after children struggle a bit with their reading and don’t know what to choose for themselves in a bookshop or a library. That’s where the Letterbox Club parcels are so great, giving children the chance to feel that they’re special; that people care about them; that they can achieve great things educationally; that they have a fantastic future ahead. If my Tracy Beaker were real, she would have relished those parcels.”