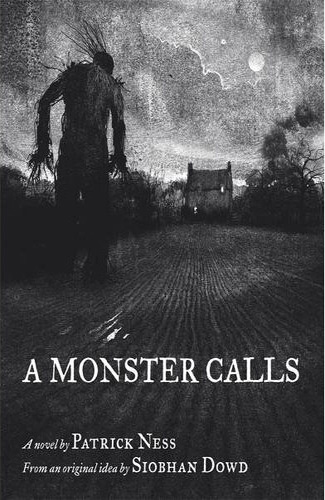 by Patrick Ness, illustrated by Jim Kay (based on an idea by Siobhan Dowd)

“When does a writer really die? Since Dowd’s death, her publisher has brought out her Carnegie-winning novel, Solace of the Road. And now Patrick Ness and illustrator Jim Kay have created a new book from a set of notes that she left behind. In a moving introduction, Ness says it was like being handed a baton and told to run. Well, he ran fast and he ran with grace.” Frank Cottrell Boyce, The Guardian

In addition to the four award winning novels Siobhan left the roots of a fifth short novel. Carnegie Award & Costa winning author Patrick Ness has written a novel inspired by her initial outline. Critics have widely praised the result, saying it is neither typical of a Siobhan Dowd book nor a Patrick Ness title but a unique hybrid of two of the best Young Adult writers. A third collaborator, Jim Kay has added to the book’s power with striking and menacing black and white illustrations.

It is the story of 13 year old Conor, who is visited by a monster – part giant, part yew tree – while his mother is dying of Cancer. The monster returns for three nights to tell Conor three stories and demands in exchange that Conor face the truth he has been trying to avoid.

Hilary Delamere at The Agency (London) Ltd handles all rights in Siobhan’s books please contact her at :hd-office@theagency.co.uk

A Monster Calls is available in the following translations